RUSSELL TWIN 8 and RUSSELL TWIN 7 Mill Relining Machines are also available for large SAG/AG mills providing two, completely independent, Mill Relining Systems in the one mill. The value of having two independent machines operating is in the fact that the actions of one machine do not distort the other. There is no deflection of the first beam caused by weight onto or off the second beam. This gives true operations efficiency, and has enabled some of RME's Customers to reduce their reline time by slightly more than 75%. 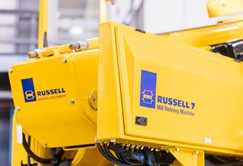 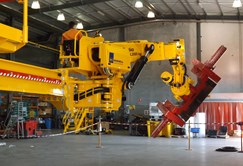 The RUSSELL TWIN 7 Mill Relining Machines work together as a system to increase the speed of the relining process in slightly smaller mills where the eight axis is not an option, enabling the mill to be returned to service in the shortest possible time. 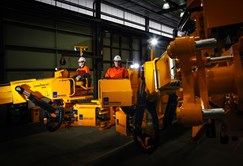 RME's RUSSELL TWIN 8 Mill Relining System feature liner lifting capacities from 3500kg to 8000kg (on each of the two machines), and typically access the mill cavity from the mill feed end.