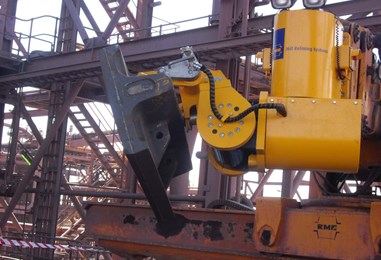 RUSSELL Mill Relining Machines and Mill Liner Handlers have an operational life of up to 25 years, which will often suit factors such as mill life, liner technologies, mine life and mill liner handling technology advancement.

RME designs our suite of technologies for long term use, and the fact that there are over 400 RUSSELL Mill Relining Machines and Mill Liner Handlers worldwide that are operational and over 5 years old, gives credibility to RME's claims of design and manufacturing leadership.

However, sometimes an older RUSSELL Mill Relining Machine or Mill Liner Handler can be retrofitted with new features to ensure it's functionality is able to keep pace with the technologies available on newer machines.

Furthermore, many of the components of the RUSSELL Mill Relining Machines and Mill Liner Handlers have a finite, age-dependent life. RME strongly recommends a major overhaul, including non-destructive testing and complete hydraulic hose refit, every 5 years.

As the OEM, RME is best placed to complete major servicing and rebuilds. Thousands of hours have been invested to create RME’s Family Tree database. The Family Tree is a taxonomy of features for all equipment in the RME Mill Relining System, allowing RME to understand the wear rates and history of the thousands of componentry pieces and parts which make up all RME Mill Relining System equipment items. This insight is the foundation for RME’s managed asset maintenance program, overseen by RME’s Customer Support Coordinators and performed by RME’s Customer Support Technicians (CSTs).

Numerous clients have undertaken major rebuilds of their equipment with RME. In many instances, RME has provided our Customers with a rebuilt RUSSELL Mill Relining Machine that will safely and consistently operate until end of the mine asset. This is especially prudent when the commodity price and cost to alleviate the mineral from the ore body is more viable, and economic decisions to extend the life of the mine are made.